This is one of our favourite comedy magic routines. Everything goes wrong for the performer, but thankfully, a surprise magical twist provides a happy ending.

From the start everyone in the audience is in on the secret. All the cards in the deck are the same as the giant prediction card. But it all goes wrong when the spectator picks another card. The Performers is as amazed as everyone else! ‘Looks like you’re a better magician than me!’ The spectator is asked to take out the prediction card from the bag. Incredibly, the giant card has changed into the chosen card! How? Not even the magician is sure, just happy to take the credit.

A wonderful plot you can have a lot of fun with. Kids love this effect, thinking they’ve got one over on the adult performer. Recommended for any performer, church or youth worker looking for an entertaining comedy magic trick that plays for the largest of audiences.

And here's a bonus, the deck of cards can be used to force a card for any other card effect. An invaluable tool for any performer.

Another fun magic trick from the masters of Italian magic, DiFatta. 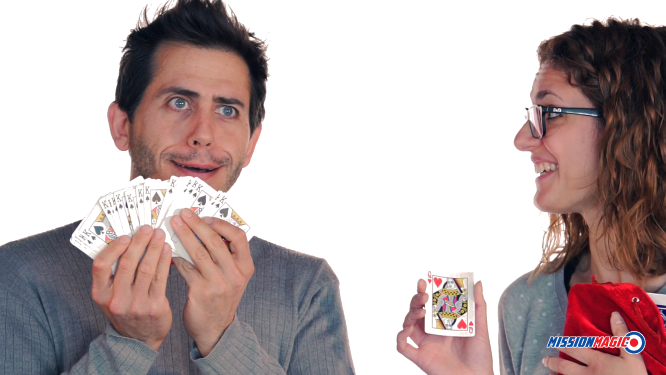 Ah! That didn't go to plan!

The Performer shows the audience their prediction (the Queen of Hearts) in the form of a jumbo card. The card is sealed in a drawstring bag and given to a spectator for safekeeping. The spectator holding the bag is the only person who does not know what the prediction is.

The Performer now winks at the audience and shows them the faces of his deck of cards. The audience start to smile to themselves, as all the cards are all the the Queen of Hearts. The cheeky Performer cannot go wrong!

"Man plans and God laughs." From the story of Joseph fall to his rise in Egypt, from the moment Saul met Jesus on the road to Damascus, the Bible shows that so many things in life don't go plan. Better to trust in God’s plans, no matter how surprising they are. “For my thoughts are not your thoughts; neither are your ways my ways.” Isaiah 55:8

You'll be amazed the fun you can have the Comedy Royal Prediction. Your next performance is literally in the (velvet) bag!