Can you find where the Queen is? Magical fun comes in Jumbo size as everyone plays hunt the Queen, the perfect magical game for audiences of all ages.
If you can hold the cards, you can do this trick. These cards are Fully Automatic. They do all the work for you, allowing you to focus on entertaining your audience. Audiences love this. Everybody gets the opportunity to follow to Queen, only to be completely floored when she appears else where!
Perfect for beginners and professionals and filled with lots of audience participation. An entertaining game and a baffling magic trick all rolled into one.
EFFECT
Three jumbo cards are shown. Two Kings and one Queen. Everyone carefully keeps an eye on where the queen is, as you swap the cards around.
Where is she? THERE! Everyone points. But when the card is turned around it's a King, because the Queen is this card over here.
WOW. Let's do that again. Why not! This is one of those rare tricks that can be repeated, slower, faster and funnier.

There are probably as many ways to present this classic of magic as there are magicians. It makes a good opening effect as an entertaining magical game everyone can take part it. Great fun with a volunteer as the audience gets worked up as your volunteer fails to find the Queen again and again. Play it for fun with kids and more seriously with an adult audience.

Teleportation - Magic with two cards as the King and Queen swap places when you press the buzzer.

Prediction Panic! Show the audience the Queen of Hearts as your prediction. Slide this into a large envelope. Force the King of Spades from a regular deck of cards onto a volunteer. Look surprised when it doesn't match your prediction. But before you pull the card out say 'Luckily, I've got magic in spades!' and remove the King of Spades from the envelope.. Or you can act just as surprised as your audience when you reveal the changed card, adding to the mystery!

Patriotic Portrait - Fun with one card. Offer to show a picture of Her Majesty the Queen in her younger days, but show the picture as a bearded king. The audience will be quick to point your mistake...Lizzie doesn't have a beard! Take out giant comedy paintbrush and mime fixing the portrait by painting frantically. Reveal the finished picture as the Queen...one is most amused!

Kicker- What ever the routine you can add surprise twist at the end by revealing all the cards as Kings or Queens. 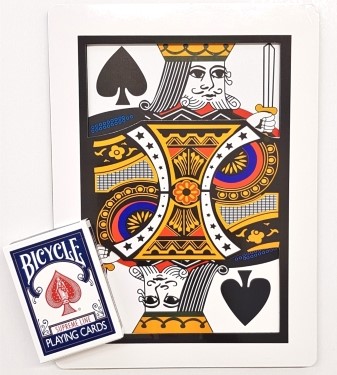 These are BIG compared to a standard deck, making the magically change all the more impressive

Christmas: Show the three Kings and talk about the three Wise Men visiting Bethlehem. When they arrived, they were surprised to see Mary in the stable, (one of the cards magically changes into the Queen of hearts), along with a newborn baby. This baby was of course Jesus Christ, the Heavenly King, and the Queen magically changes back to a King.

Easter:  With one card you can retell the story of the resurrection in a uniquely memorable way. The Queen represent Mary Magdalene. She arrived at the tomb but was surprised to find it empty, until she saw that Jesus had Risen. Now reveal that the card has magically changed into the King, as Jesus is the King of Kings.

A trick fit for royalty.