This has the ZOOM SEAL OF APPROVAL! Perform your magic online now! This trick is ideal for being performed to camera as well as to a live audience.

Trapped with no escape - but there is always a way out!  Amazing feat of escapology that comes with a powerful message 'Christ sets us free'.

Use this baffling trick to retell the story of one of Houdini's greatest jail breaks and both Peter's miraculous escapes from prison.

Perfect for a small group of friends or colleagues.

Two solid plates are slotted into the wooden base. A chain is dropped into the gap between the plates and a key pushed through both plates and left in place. The chain is trapped. Now for the magic. The chain is held at both ends and slowly pulled up. It magically passes through the shaft of the key and escapes!

It looks impossible because, under the conditions, it should be impossible. The props can be examined before and afterwards, proving that you have truly preformed something extraordinary under the strictest conditions possible. 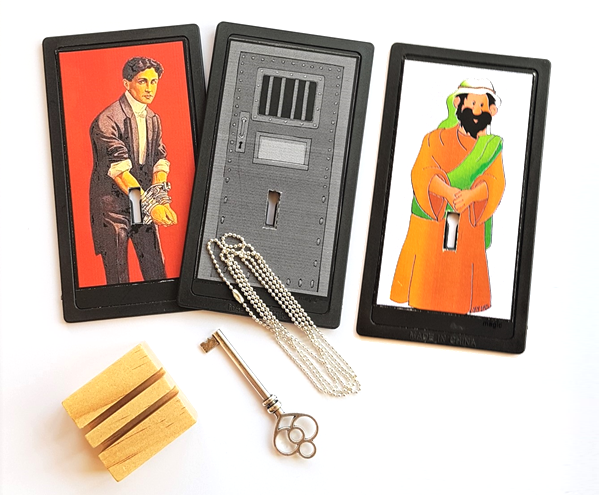 Everything can be examined with this baffling escapology effect.

The plates come with a picture of Peter on one side and Houdini on the other, allowing you to pick which story you tell. Peter's miraculous escape or one of Houdini's greatest feats of escapology.

What effect could better illustrate the freedom found in Christ. 'He has sent me to proclaim freedom for the prisoners.' Luke 4:18

This is the perfect illustration of Peter's miraculous escape from prison in Acts 12 and Paul's escape in Acts 16. The cell door is placed in the slot in front of Peter's picture, as you explain how Peter was put in prison. The silver chain is dropped into the gap, illustrating how Peter was chained.  The key is pushed into place, showing how the cell was locked and guarded.

Now for Peter's escape! Taking hold of both ends of the chain you magically make it pass it through the key. The perfect illustration of how the chains felling off Peter's wrists when an angel appeared. The cell door is pulled out of base as you explain how the doors miraculously swung open. This leaves Peter standing free. A miraculously escape from prison and a memorable day in the life of the early church

References to doors and chains are found through out the Bible. You won't be short of other verses to use and messages to illustrate with this effect from Joseph, to Sampson to Paul. 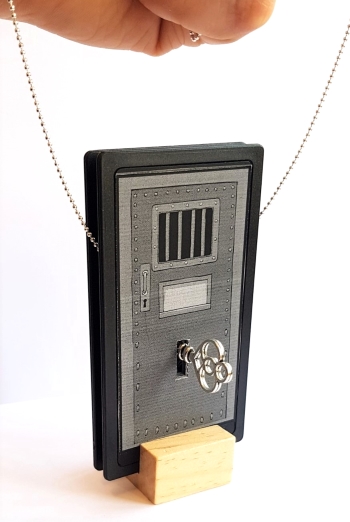 The chain passes through the key - it looks impossible!

In his early days, he billed himself as The World Champion Jail Breaker. In each city Houdini visited, he would arrange to be "tested" by the local jailer. In 1906 Houdini was challenged to escape from a Boston prison. He was placed in a high security cell block, locked behind a thick metal door. (The door is placed into the wooden base in front of Houdini). He was chained and manacled (the chain is dropped into the gap) with the Warden keeping the key in his pocket. (The key is pushed into place trapping the chain).

Two hours later the Warden heard a knock at his door. When he opened it two of his prison guards were standing there holding the chain that had bound Houdini. (The chain is lifted up and magically passes through the key). The cell was empty. Houdini had escaped unseen from the prison. Later that evening Houdini called the Warden from the Boston theatre where he was performing, to thank the Warden for his hospitality.

Houdini never failed in one of his jail breaks.

You'll be performing this straight out of the box - and if you're anything like us, it will fool you as badly as it fooled us.

Comes complete with: silver effect key, silver effect chain, 1 plate with an image of Peter on one side and Houdini on the other, plate with image of cell doors on both sides (4.5x2.5 inches), varnished wooden base (to slot the doors into) and our exclusive written instructions.