Whole World in His Hands - Take your audience on an entertaining trip around the world. The colourful national flags are the perfect start for 101 Biblical messages

Take your audience around the world with this self working National Flag card trick.

Ideal for school assemblies - with the opportunity to share facts about different countries - teachers love that!

Perfect for services - the chosen flag leads you seamlessly into dozens of different stories from the Bible.

And best of all the deck does all the work for you - leaving you to focus on your presentation and message.

And exclusive to Mission Magic.

The magician displays a deck of cards, and shows that the backs of the cards each feature a different national flag. The King of Spades has the Brazilian flag. The 10 of Clubs the UK flag. 52 different cards - 52 different flags.

A spectator freely chooses a card and turns it over to reveal their randomly selected flag...in this case it's the Lebanese flag.

Now for the big reveal. The magician reaches into his pocket and pulls out a ...stone! A stone all the way from Lebanon!

Ah - but then the magician flips over the card to show the Lebanese flag indelibly printed on the back! WOW! Real magic!

And for the kicker ending the magician points to his lapel...he's wearing a button badge with the chosen flag on it. Was it really a free choice or was the spectator subtly influenced? Who knows!

And now with everyone's attention you move seamlessly into your message. 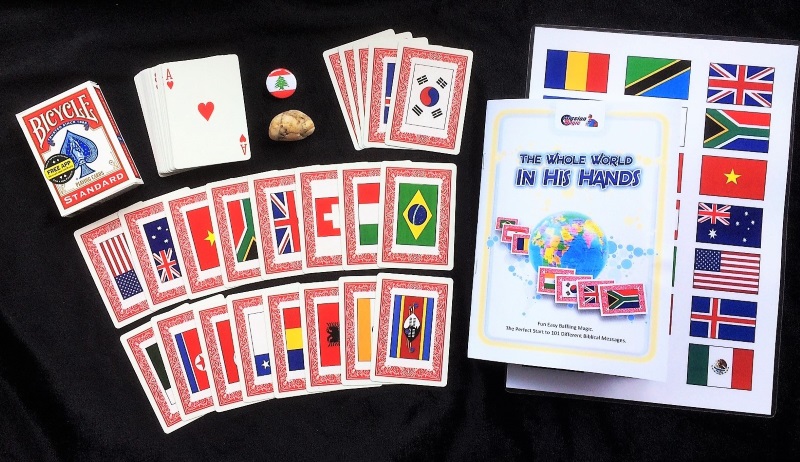 Everything you need for an international magic trick!

We've packed our 20 page booklet full of ideas for different messages based on the flags on the cards.

The selected flag is full of Biblical links and symbolism.

Remember, you already know the national flag they are going to pick - so your message is ready to go.

Paul Morley suggested the following presentation. Explain that it's interesting that they picked the flag of Lebanon. ‘The white and red in the flag reminds us that Jesus died on the cross, so we could be forgiven for our sins, and made as white as snow.

The flag also has a tree in it. Did you know that the Bible is full of different trees. In the book of Genesis there is the tree of the knowledge of good and evil. In the New Testament, the tree of curse that Jesus died upon on the cross of Calvary. The tree of life in the book of Revelation , that those who become friends of Jesus will one day eat as they live in the eternal city with Him.’

Alternatively pose the question - which is God's favourite country? Of course, He doesn't have one because He loves the whole world equally!

This special deck does most of the work for you. That’s right, there’s no sleight of hand, no memory work, no fancy moves to learn!

You can focus on the presentation, and there are so many different ways to announce the chosen flag.

As well as the gags using a stone and a the card with different flags our booklet is full of ideas to give this effect an unforgettable ending. Who would have thought you had the music to that countries national anthem ready to play - and know the words as you sing the open bars! And that's before you unfurl a large version of the same flag.

We’ve done the groundwork though, giving you lots of ideas and inspiration!

BONUS 3 - free stone! Yes we give you EVERYTHING you need - no need to scrabble in the garden for a suitable rock!

No need to buy a plane ticket - just grab this deck and you're ready to take your audience on a entertaining journey around the world that closes with an unforgettable message.

Specially prepared deck of cards with country flags on the back, a stone, pin button, A4 double-sided laminated prediction card with envelope and a 20 page instructional booklet.